In March 2013 ‘Incarnate’ will be available on Vimeo.com as the culmination of my work as the resident artist for BUNKER PROJECTS in Pittsburgh PA. In the film, the main character is rendered out of left over materials from an abandoned building and ultimately gives up on the pursuit of building an identity out of objects. ‘Incarnate’ will be shown with its artwork in the BUNKER PROJECTS gallery space on April 5, 2013 as part of Pittsburgh’s UnBlurred Gallery Crawl. 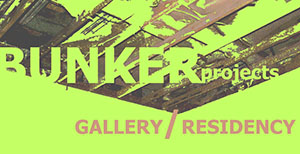